Thank you for all the support and sponsorship for Breast Cancer Care. Our speedy iwantnoodles.com runners raised a fantastic £614.68; well over their target of £500. Our runners, Selina Tan and Joe-yee Chow were joined on the day by over 3,000 other runners to run Bristol’s first ever official 10km race.

The dedicated training of the girls paid off as Selina Tan completed the 10km in 59m 46s, and Joe-yee Chow was close behind; completing in 1h 56s. Both looked dashing in their iwantnoodles.com sponsorship T-shirts.

Photos of Selina and Joe-yee running can be found on www.marathon-photos.com. Selina’s race number is 8031 and Joe-yee’s 8170.

Joe-yee said: “At first, we followed the crowd and went too fast. After the first mile, we decided to slow down and pace ourselves better as we had done in training. This meant that by the halfway point we were beginning to overtake people and we were able to put in a final sprint!”

Selina said: “I am so pleased to have completed the race in less than one hour! I trained for this so long, and really wanted to break the one-hour barrier.”

It’s not too late to show your support, so if you are interested in donating, you may do so through Selina’s justgiving.com page! 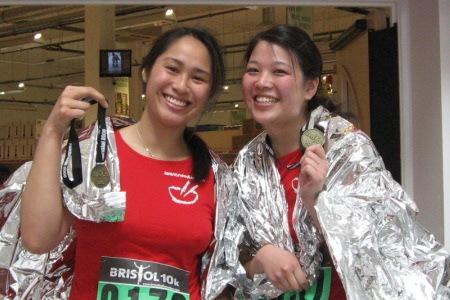