The arrival of a baby is a joyful event that is marked in Chinese culture by a number of different customs and rituals. The importance of these traditions and superstitions can vary from family to family, and many modern mums will consider them to be old-fashioned, so do not adhere to them as strictly as their predecessors.

The traditions start before the baby is born, with many superstitions and old wives’ tales surrounding the pregnancy and mum-to-be.

Mothers-to-be are encouraged to keep a happy disposition, as it is believed that the emotional state of the mother during pregnancy will affect the unborn child. A sad and stressed mum will lead to a baby who cries a lot. Neither is she to swear or speak vulgar language for risk of cursing the baby!

Expectant mothers should not shower their bumps with too much love! Rubbing the bump too much could lead to the child becoming spoilt and demanding too much attention.

In the home, there must be no renovation works such as drilling, sawing and hammering. It is believed that this could affect the development of the baby. Pack the tools away; DIY is out! Neither should glue be used by the mother-to-be, as this may lead a difficult labour.

Chinese culture believes that following the birth, both the mother and baby are in a weakened state, and are susceptible to falling ill. For this reason, both mother and child are to rest at home for one full month. During this confinement, the mother will eat special restorative foods such as nutritious broths to build up her health. These will include yang foods such as pigs’ feet, eggs vinegar and ginger to restore the balance of qi in the mother’s body.

Following the full month of confinement, mother and child are presented to friends and relatives with a full moon celebration, sometimes known as a ‘red egg and ginger party’. The origins of this custom come from ancient Chinese culture, when infant mortality was high. These parties were held to celebrate that the baby had survived the first month of their life, which meant that they were more likely to survive into adulthood.

Modern celebrations tend to be banquets held in a restaurant by the family. Guest will bring gifts of money in red envelopes, or sometimes jewellery and gold, if the baby is a girl. In return they are treated to a banquet and presented with plates of red eggs and pickled red ginger. If it’s a boy, you give out an odd number of eggs, and if it’s a girl, you give out an even number of eggs. The colour red is associated with luck and happiness, and the rounded shape of the eggs symbolises harmony, unity and new life. The ginger is served for the same reasons that mothers eat it following the birth, as a yang food to balance the qi in the body. 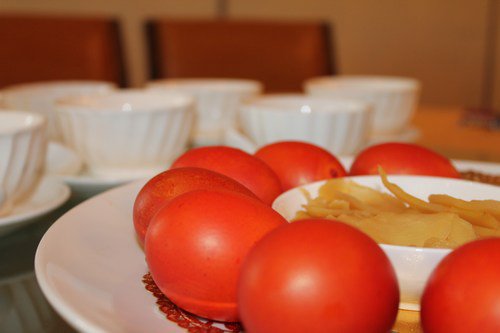 Red eggs are made by dipping hard-boiled eggs in red food dye. To make the eggs take on the dye more easily, they are often boiled in water with salt and vinegar, which makes the shells more porous. The eggs are allowed to cool, after which they can be offered to family, friends and guests to the full-moon party.

In countries with a high Chinese population, slight variations on these customs are made. In Malaysia, friends and family are given yellow glutinous rice coloured with turmeric, red eggs and sweet red glutinous rice cakes (ang koo). These cakes (kueh) are shaped as round balls if it is a boy, and little tortoise shapes if it is a girl. These sticky-rice cakes are filled with sweet mung bean paste and stem from Nyonya cuisine, a fusion of Chinese and native Malaysian cultures.

Around the same time as the full month party, babies will be given their first hair cut. Traditionally the baby’s head is shaved, leaving the hair at the top of the crown, to remove the birth hair, which is thought to lead to a full and thick head of hair growing in its place. The mother and child are then washed with water infused with pomelo-leaves to cleanse their bodies and ward off evil. Nowadays, the practice of shaving the baby’s head has become less common, although many parents still cut off a lock of hair to tie up with a piece of red ribbon as a keepsake.

As a child is learning to walk, they will be given jade bangles to wear. These act as a wrist guard to protect the child should they fall down. This way, the bangle will break in place of any bones.